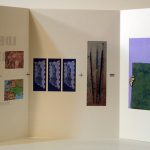 In an insecure world of fallible people with fallible ideas and ideologies, invited artists were asked to create their own documents for purposes (known and unknown) of identification, emigration, immigration and imagination in an exhibition that was transported Internationally to several locations, including: