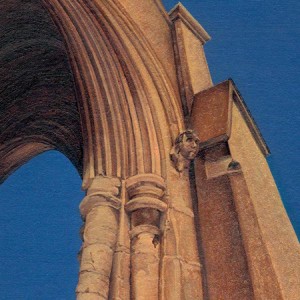 As a native of Brooklyn, Maddy Rosenberg also spends several months each year in Europe, understanding the necessity of exploring new places to broaden her idea base as well as gather new reference material for the work. She is an artist who works in several media: oil painting, artist’s books, printmaking, drawing, toy theater and installation. Rosenberg recently had a solo exhibition at Galerie Hadorn in Switzerland and a two-person exhibition that was the culmination of a month long residency sponsored by the US Consulate in Munich. Rosenberg’s work has appeared in numerous group exhibitions, including at the National Museum of Women in the Arts, The Brooklyn Museum, Philadelphia Athenaeum, Cape Cod Museum of Art, The Center for Book Arts, Hebrew Union College Museum, Flux Factory and Kentler International Drawing Space in the U.S; Médiathèque André Malraux in Strasbourg; Eagle Gallery in London; Herzog August Bibliothek in Wolfenbüttel (Germany) and Inselgalerie in Berlin.

Rosenberg maintains an active international curatorial as well as exhibition career. She approaches curating as an extension of her art practice. In September 2009, Rosenberg opened CENTRAL BOOKING (www.centralbookingnyc.com), a multi-disciplinary art space focusing on artist’s books and exhibitions on art & science, in DUMBO, Brooklyn, representing over 150 artists. CENTRAL BOOKING moved to Manhattan’s Lower East Side in 2013 where it expanded its size and programming, allowing for more ongoing collaborative partnerships. It has since increased its online presence by joining Artsy in March 2018 and continues with projects worldwide.

The exhibitions for Rosenberg’s project Plant Cure featured the work of six Artists in Residence at the New York Academy of Medicine, along with other artists working with the theme of medicinal plants, at both NYAM and CENTRAL BOOKING, with funding from a Creative Engagement grant of Lower Manhattan Cultural Council/ NYC Department of Cultural Affairs. Her most recent international curatorial projects were Technology and the Evolution of the Artist’s Book in Brighton, England (which won Best Exhibition from the Fringe Festival 2016) and Polish Impact: Ha!wangarda an exhibition and festival focusing on book art and E-literature funded by the Polish Ministry of Cultural. Redux, in 2015, was the fourth exhibition she curated at The Center for Book Arts in New York. In 2005, Rosenberg’s international multi-venue curatorial project, New York/Paris DIALOGUE Paris/New York received a National Endowment for the Arts grant. It included three exhibitions in New York, three in Paris, a video, catalog and programming. After producing the ArtistsBook Library for the exhibition on the theme of Library at Proteus Gowanus, a non-traditional space in Brooklyn, she continued as curator until 2008.

Rosenberg earned a BFA from Cornell University and a MFA from Bard College.